When I first read Harry Potter and the Cursed Child back in 2016, I liked the story but I felt it was lacking somehow. After all, it was written as a screenplay and didn’t have the same compelling storytelling and vivid descriptions as the first seven books. But when I finally got to watch the play at the Palace Theatre in London last month, I thought, “Now, that’s how this story is supposed to be experienced!” 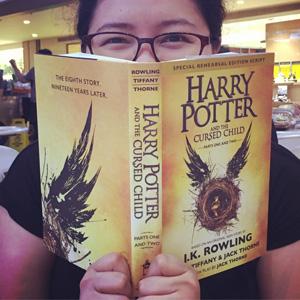 Below are five things I loved most about the play, along with some tips you might find helpful if you plan to watch it anytime soon. Don’t worry, I won’t be posting any spoilers because J.K. Rowling specifically requested that we #KeepTheSecrets!

1. The bromance between Albus and Scorpius. Theirs was a forbidden bromance, as their fathers (Harry and Draco) were arch enemies. But these two just couldn’t help but become best friends. Kudos to Samuel Blenkin, the actor who played Scorpius. He was hilarious!

2. The incredibly talented cast and crew. Aside from the two lead actors, I also loved seeing the cast play Harry, Ron, Hermione, and Draco as their older selves. As playwright Jack Thorne said in the play’s souvenir program, this play had “a sensational cast and a crew that can make the ordinary extraordinary.” My dream is that one day I’ll get to watch Dan Radcliffe, Rupert Grint, Emma Watson, and Tom Felton reprise their roles in this play as the adult versions of their characters in the HP movies.

Check out this behind the scenes shoot of this year’s cast:

3. The magic and special effects. People disappearing and reappearing, spells being cast, and dementors flying across the theatre—it was a play and a magic show rolled into one! It completely blew me away, and was unlike anything I’d ever seen in any other play before.

Spot the Dark Mark at the theatre in the photo below:

4. Ron and Hermione. I have to admit, I was never a fan of this pairing. I always thought Harry and Hermione should have ended up together—especially since Dan Radcliffe and Emma Watson had such great chemistry in the movies. But the play showed me that Ron and Hermione are actually a good match—Ron’s playful, affectionate personality balances out Hermione’s serious, bookish demeanor. (I’ve always identified with Hermione, and now that I think about it, my husband is actually a lot like Ron!) Anyway, the actors in the play made me believe that Ron and Hermione were meant to be together.

5. Five hours of Harry Potter goodness. When we first bought tickets, I was baffled as to why we had to buy a set of two tickets for two days. Then I learned that the play is actually in two parts, and each part is about two and a half hours long. (The set we got was for two consecutive days but there are also days when you have Part One in the afternoon and Part Two in the evening.) Part One felt a bit slower, since we were just getting acquainted with the characters, but as soon as the curtains opened to reveal the intricately designed set at the Palace Theatre, I was transported into the Wizarding World. Part Two was definitely more exciting, but for a play that lasted almost five hours in total, I did not feel bored at all. I think Potterheads will agree that more Harry Potter is always a good thing!

Tip: It’s not too late to buy tickets! Even if the play is fully booked, just keep trying because there are people who cancel at the last minute. We actually got three tickets just a month before we left for the U.K. (Though one of the seats was not located beside the other two.) Book your tickets at HarryPotterthePlay.com. The play will also be showing in Broadway by Spring 2018!

P.S. If you have some time between watching the two parts, be sure to check out the House of Minalima, which showcases many of the graphics that designers Miraphora Mina and Eduardo Lima created for the Harry Potter movies. It’s just walking distance from the Palace Theatre and is definitely worth a visit.

2 thoughts on “Review: Harry Potter and the Cursed Child”